Halloween musical. The greenback staged a light show on his house 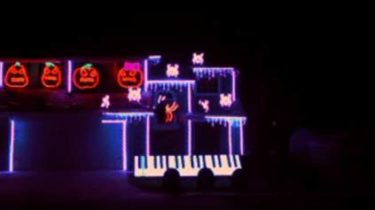 American Tom Beth George on the eve of Halloween decorated your house with colored lights that moves to the music “Nightmare before Christmas”.

The show lasts for two hours, and all saints ‘ Day to extend the fun for another hour. Installation design enthusiast began in August, writes TJournal.

“I wanted to do a free show for the neighbors, especially for those who can’t afford a trip to Disneyland. Some people want to pay me for it, but I don’t take money. I have the money to the local homeless shelter,” explained Tom.

Halloween in a big way: in the KSCA feed the spiders, and the school was filled with “witches” and “monsters”

The American added that sometimes in his house the police come and bring over his family.

Earlier it was reported that in the zoo of the British capital – London – the animals already began to celebrate all saints Day. For Halloween in the cages of animals brought a carved pumpkin figures. The inhabitants of the zoo quickly finished with the gifts and had dinner with them.