“Sitting at the foot of the five fragments.” Mosiychuk told about sleepless nights in the hospital 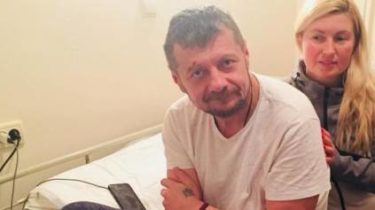 MP from the Radical party Igor Mosiychuk, who was injured in the explosion near the channel “espresso”, told about his condition.

The politician wrote in Facebook that is suffering from severe pain.

“Night survived with great pain in the back, hand and foot. Most exasperated almost a stiff leg, which sits five pieces. Thank you to everyone who supports me,” – said in a statement.

Good morning, Ukraine! Night survived with great pain in the back, hand and foot. Most exasperated almost numb leg …

To the post, he added his photo on the hospital bed.

We will remind, in the evening of 25 October, in Kiev, near TV Studio Эспрессо.TV the explosion occurred. The explosion injured five people, among them Mosiychuk. His security guard died on the way to the hospital. The victim was also a bystander – former employees of the interior Ministry Mikhail Morel, who lived in the house next to which blew up the bike. Law enforcement officers linked the attack with an attempt on Mosiychuk, but friends Mormile say that the target of the criminals could be it.