Metropolitan police are looking for three Caucasians, started a fire in the restaurant 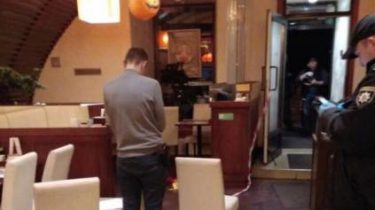 The shooting in the restaurant that occurred yesterday, October 28, at the cave, in which one man received a gunshot wound to the head, qualify as “attempted murder”, said the press Secretary of the capital of Ukraine Oksana Blischik the TV channel “112 Ukraine”.

“Now investigators qualify the incident as attempted murder. This is article 115 of the Criminal code of Ukraine providing till 15 years of imprisonment”, – she said.

The identity of the victim is already installed. This is the man 1975 year of birth who was born in Lviv, but in recent years lived in Kiev.

Also Blischik told the details of the incident. According to witnesses and staff, first entered the restaurant the victim. Ten minutes later he was approached by three men and started to swear. In the midst of conflict, one of them pulled out a gun and shot the victim in the head. Now the man is in hospital in serious condition.

Surveillance cameras recorded three attackers – two young men and a man postrace of Caucasian nationality. Their search is now focused all the outfits of the Metropolitan police.

We will remind, on October 28 in Kyiv restaurant building in the downtown, Pechersk, had a quarrel with shooting, leaving one man received a gunshot wound to the head.