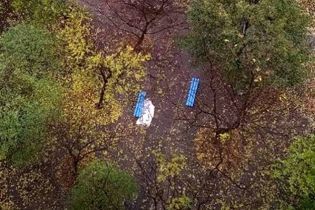 Monday, October 30, in the capital on the academic campus have discovered the corpse, which for some reason nobody picked up, reports dtp.kiev.ua.

According to eyewitnesses, the body is thrown medics arrived on the scene, and subsequently ignored him and the police. Now it just sits at the bench.

“In the morning on a bench in the courtyard at St. Palladin, the man died. The ambulance came, stood for half an hour, go. The police arrived, stood for half an hour, go. For two hours the body just lies in the middle of the yard. Svyatoshinskaya district administration, how is this possible? The police shouldn’t patrol the place to be on duty until you take the body?”, – stated in the message.

Recall, recently it was reported found in the Kharkov region the body of the boy who was looking for the last two months. In the murder confessed to the local mentally ill man, who said he struck the child stabbed 32 times and all this time went to see how the decomposed corpse.

Videoplease to cover up the death of colleagues, threw his body into the well