“I hope by “trash” I mean the huckster”. Saakashvili reacted to insults from Avakov 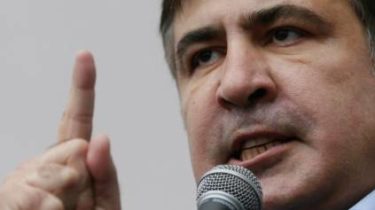 The leader of the “new forces”, the former head of the Odessa regional state administration, Mikheil Saakashvili responded to the words of the interior Minister Arsen Avakov in the side of the protesters under the Rada.

“It’s time! I hope the word “junk” refers to Rosenblatt, Berezenko, Lyashko and the other glorious representatives of the huckster in power, because the National guard is not guarded by protesters and MPs from the people who came to talk to them”, – said the politician.

It’s time! I hope the word “junk” refers to Rosenblatt, Berezenko, Lyashko and the other glorious representatives of the bar…

Saakashvili expressed hope that the November 7 parliamentary deputies not will be guarded by national guardsmen and people will be able to freely communicate with members about broken promises.

“Dear MPs to follow the orders of your Minister and come to the meeting without guards and not back, to look into the eyes of your fellow citizens, they will ensure physical integrity in exchange for the lifting of parliamentary immunity and perform another promise, which is already three years of waiting. And by the way, will return to the Treasury of the 1.3 million already spent UAH for the removal of three of my Georgian friends on a special flight?”, he added.

Videolatina, said that Saakashvili and his supporters have been trained in the Ukraine coup