Near Kiev shot the car with Amina Okueva – she died 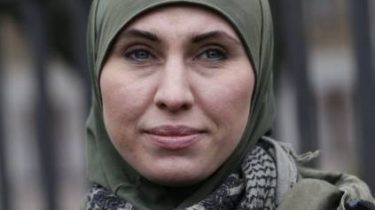 Near the village of glevaha in Kyiv region unknown persons have shot the car, which drove Chechen volunteer Amina Okueva and her husband Adam Osmayev. The woman from the received wounds has died. The man was taken alive to the hospital.

About this in Facebook wrote the people’s Deputy and Advisor to the Minister of internal Affairs Anton Gerashchenko.

“Just stopped the heart of a patriot of Ukraine Amines AquaWay. Her car was fired upon from the bushes at a railway crossing near the village of glevakha, Kyiv region. The result of his injuries Amina died. Adam Osman was wounded, but would live. I just talked to him on the phone. At the place of work investigative team police,” – said Gerashchenko.

Police announced the plan interception and is looking for the killers.

Going to promoted to General

We will remind, earlier Okueva and Osmayev was committed attempted murder. The shooting occurred June 1 at the capital’s hem. Volunteers battalion “Kiev-2” Adam Osmayev, which in Russia is accused of plotting to assassinate President Vladimir Putin, and Amina Okueva came to interview with the alleged French journalist. At the meeting, he pulled out a gun and got to Osmayev. His wife Amina began shooting in the response of premium firearms and shot the attacker. According to her, he was a coward, and immediately surrendered.

After the attack Natspolitsiya took under heavy guard and Okueva Osmayev, who said that the attempt on the life of her husband was not for the first time.

Videoexclusive TSN: Amina Okueva is convinced that the attack on their family has been registered