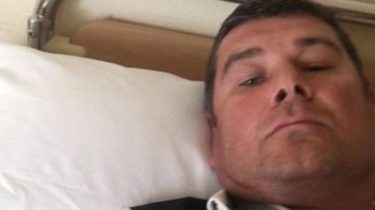 Scandalous people’s Deputy, the fugitive Alexander Onishchenko, during the competition, fell from his horse and broke his arm.

“It happens in life. Slipped off the horse, woke up in a cast,” – said Onishchenko.

It happens in life. Slipped off the horse , woke up in a cast Sometimes happens between Competitions

Subsequently, the people’s Deputy, the fugitive said that the incident occurred during an international tournament in Spain.

“I played for Ukraine. Show jumping – jumping. The horse broke well in advance. Alive, broken arm, had surgery. Well, that left, not right. It is possible to sign checks,” said he, writes “the Country”.

Recall that Onishchenko is suspected of organizing schemes of embezzlement of funds in the extraction and sale of natural gas in the framework of joint operation agreements with PJSC “Ukrgasdobycha”, which was caused to the state damage for the sum about 3 billion UAH.

According to investigators, in the period from January 2013 to June 2016 the members of the criminal organization illegally took control of funds received from the sale of gas, in excess of $ 1.6 billion, resulting in the company suffered losses of more than 740 million UAH.

On 27 July the Prosecutor General of Ukraine signed the message on suspicion to the people’s Deputy. On 8 August he was put on the national wanted list. According to the latest information Onishchenko is located in London. A few days later he wrote in his Facebook that British jurisdiction, the GPU is little ground for his extradition to Ukraine. Meanwhile, the people’s Deputy-the fugitive arrested property at 700 million hryvnia.