The Russians were prepared against Gerashchenko diversion, which would “hang” for a battalion “Donbass” 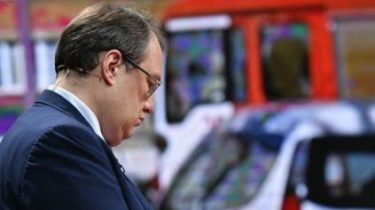 People’s Deputy of Ukraine and member of the Board of the Ministry of internal Affairs Anton Gerashchenko said that he and his wife were preparing a diversion that would hang on the battalion “Donbass”.

In the air “Right to Vlad,” on the channel “1+1”, the MP said that on the morning of 21 October, at 5.21, the man burned the car, which was parked near the entrance Gerashchenko. The attacker is believed that this car belonged to the wife of the Deputy.

According to Gerashchenko, his wife has no car and burned the car actually belonged to his neighbor.

“My second birthday”. Gerashchenko first told about the attempt of the Russian special services on his life

The attacker was wearing the uniform of the battalion “Donbass”. Moreover, 8 minutes after the arson in the community Dtp.kiev.ua there were photos of the burned cars. The report said that fighters of a battalion “Donbass” has undermined the car of his wife Gerashchenko. One of the activists of the community in the morning called the Deputy about the incident, Gerashchenko said that his wife had no car and fake information was not distributed.

Subsequently it became clear that arson was involved citizen of Russia. He did it at the direction of the Russian side. The security service of Ukraine on 2 November reported on the arrest: the intruder walked with a grenade for a new job. He was in the form of special forces of the National police.