A sharp increase in attacks towards the APU and three wounded Ukrainian military. Chronicle of the ATO 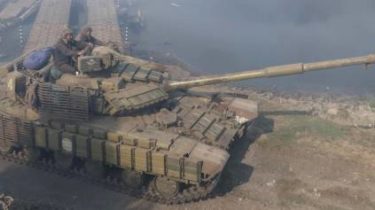 Over the past day in the area ATO militants dramatically increased the intensity of attacks on positions of the APU in all directions.

This was reported by the press center of staff ATO.

At the end of the last days the situation in the ATO area and continued to remain tense, but fully controlled by the Ukrainian army.

If in the past few days the number of attacks of the Ukrainian positions decreased, yesterday Pro-Russian militants have stepped up firing provocation actually along the line of demarcation.

The most actively fired at the Donetsk direction. Almost 18 hours until midnight, the militants fired rocket-propelled grenades and machine guns at the plant. The Ukrainian military strictly meet the enemy. The result of this confrontation, about 19 hours was wounded one Ukrainian soldier.

Also, under the fire of infantry weapons of the invaders in the evening hit the strongholds of the AFU near Peski, Russian Federation, Butovka and twice near Luhansk. And in the area of the Trinity, the enemy used mortars of caliber of 120 millimeters.

At the direction of Lugansk, near Novoaleksandrovka, in result of attack of fighters from a heavy machine gun, was wounded another soldier of the ATO forces.

#Topad #Foresnic #Donbas #spokesperson #statement the Construction of the press center of staff ATO in 3.11.2017 at the End…

Published by the Press center of the ATO headquarters November 3, 2017

In addition, mortars caliber 82 mm, the invaders were beaten on the outskirts of Trekhizbenke. A whole range of infantry weapons used at the Village Lugansk, Novozvanovka, Valuyskiy.

On the seaside direction, and in the evening under fire from Pro-Russian occupiers of Ukrainian fortifications on the outskirts of Talakivka and Taramchuk.

Since the beginning days of the Russian occupation groups 29 times violated the truce. ATO forces 17 times superior tough fire forced the enemy to peace. In the fighting three Ukrainian military were wounded.

We will remind that on Friday, November 3, subversive group of Pro-Russian militants moved to the position of the Ukrainian army near the Crimean in the Luhansk region. The activity of the enemy noticed the soldiers of the Armed forces and warned of a possible breakthrough. The battle lasted about 40 minutes, from the army, there is one shell-shocked. However, the Ukrainian military stopped the saboteurs.