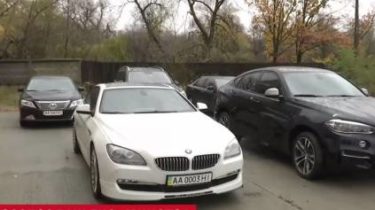 The car of the former Minister of the fugitive Alexander Klimenko can become the property of everyone who can afford their purchase to the electronic auction management Agency the arrested assets. On sale five luxury cars, among which there are exclusive models, according to a story TSN.19:30.

BMW 6-series 4-liter engine has an interior of red leather and only 6 thousand kilometers. This practically new luxury car top specification manufactured to order in 2013 and in early 2014 Klimenko ran away from Ukraine, so enjoy the machine did not even have time. This car is the only one in Ukraine, and the buyer cost nearly 200 thousand dollars. However, the auction of confiscated property to its initial price will be halved. However, there is a bonus – all the things that remained in the cabin from the previous owner, for example, pillows, napkins and even water. By law, all that should remain untouched before the auction.

Videohowto, Minister of the fugitive Alexander Klimenko put on an electronic trading

Under the hammer this month will leave all five cars of Yanukovych ally. You can see them on the auction site, and the Parking lot under the open sky. As seen on license plates, Klimenko was fond of magic numbers and icons in the salons say that the machines are sanctified. Cars can be viewed, but a test drive is prohibited – the law prohibits exploiting confiscated.

According to the Prosecutor General, just Klimenko from the state budget have stolen 12 billion dollars. Part of his property confiscated and a month ago gave the national Agency for the management of assets derived from corruption crimes. So in state ownership was 154 of the immovable property, of which 87 are elite apartments in the capital and 17 houses near Kiev. Law enforcement officers have conducted hundreds of searchesrelated to the Minister, a fugitive in his companies, in particular the media holding “Vesti” and “unison”. The latter is connected with another BMW model X6 with a 3-liter diesel engine and three turbos. Machine 2017 release, it wasn’t Klimenko, and shareholder group “unison” Oksana Chepizhko, which the prosecution imputes to the laundering of billions of dollars the ex-Minister. Through social networks the woman claims that she is now in the Carpathians, from effect not hidden, and his property will stand up in court.

The owners of the auction, convinced that the cars sold with the new owners won’t take this one. And even if she Chepizhko will be able to win the case, at best the state will return her the money received from the sale of the car. He Klimenko sale of its fleet has not commented, despite the fact that in recent years has become an active user of Facebook and even started a video blog.