Police near the Parliament stepped up security measures due to the rally. Drivers are advised to avoid the center of Kiev 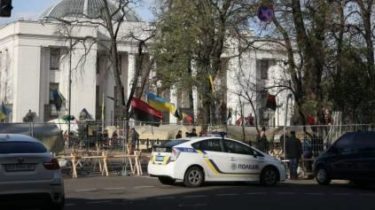 In the center of Kiev today, November 7, announced a mass protest action under the Verkhovna Rada. Security measures from law enforcement at this time more extensive than those carried out three weeks ago.

About it the correspondent of TSN, which is located in the government quarter.

People in the camp woke up and are planning a peaceful protest.

Parliament today after a two week break, will reconvene in the conference room.

Recall, 17 July in Kiev representatives of different political parties protest outside the Verkhovna Rada for political reforms. They pitched tents in front of Parliament. The government quarter was blocked by police officers. Protesters demand changes to election law, removal of parliamentary immunity and the creation of an anti-corruption court.