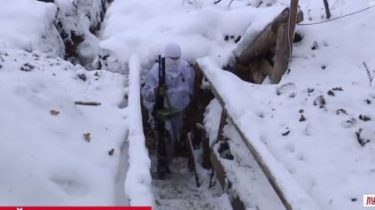 Last week, the Ukrainian military has lost in the Luhansk region in one battle of the Crimean four soldiers were killed and three army men were injured and another was captured. About the hard fight of the last months said the commander of the unit whose soldiers took part in it, says the story TSN.19:30.

Officer Sergei says that the enemy’s sabotage group tried to pass to him in the rear. Ukrainian soldiers were stopped by DRG, and then began to pursue her already in enemy territory, and there the soldiers were waiting to ambush. “As it turned out there beforehand, they had prepared positions, fortifications, gun emplacements and was customized heavy equipment,” – said the soldier of the APU. The enemy is literally pinned to the ground the whole Department of the Ukrainian Marines who were shot with machine guns and tanks. Only when earned mortars from the Ukrainian side, the enemy retreated.

Guys it’s a shame that they are now writing military experts that their unit wanted glory, and therefore went on the offensive on the enemy without preparation. “Nobody wanted any of the glory, nobody wanted no more. The enemy was spotted, it was necessary to do something, because he could pass to the rear of the two companies – both us and our neighbors,” – said the commander. His subordinate Alexander admits that to pursue the enemy on its territory was not the best solution. “Everything moved, so it turns out, for Minutes – to the area. And so I think, if it were not for persecution, the consequences would have been much better. Loss if it would have been only wounded,” he says.

After the battle, the separatists pulled to the frontline of new tanks and heavy artillery. It’s good to hear fighters frosty nights, but on the offensive fighters are hesitant to go because I lost a lot of its people. As reported, in the same battle two soldiers were missing, they had to declare dead, but the soldiers miraculously survived until the morning and went out to his.