From Kiev to Odessa train “will fly” for two hours Omeljan 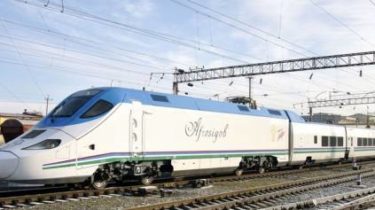 For the construction of the speed railway communication between Kyiv and Odessa need 540-840 million euros. The optimal route is the route along the highway Kiev-Odessa, where the state already has the land.

This was stated by the Minister of infrastructure Vladimir Omelian during the “infrastructure day” in the European business Association, reports “Interfax-Ukraine”.

“200% sure that the passenger flow will be,” said Omeljan.

According to him, to get from Kiev to Odessa will be for two hours and the ticket price is 500 to 700 UAH will be competitive.

The construction of one kilometer of road will cost 1-2 million euros. That is, in General, is 0.5 – 0.8 billion euros. Another 10 million euros it would cost one high-speed train, which takes four for the organization of normal movement.

On the new road is also advisable to arrange the transport of goods, said Omeljan. Later in the plans – the ability to connect this segment of the railway to Lviv and Europe, which will create a new high-speed rail route.

Recall now Ukrzaliznytsia is studying the possibility to increase the speed and reduce the time of passenger trains on the current infrastructure of technology “lightweight”.