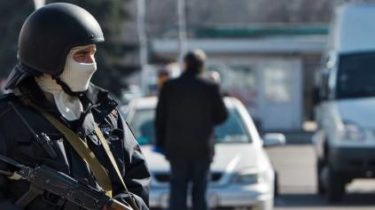 The Russian Federal security service in the occupied Lugansk massively detain and arrest the henchmen of the former leader “LNR” Igor Plotnitsky.

This was stated by the speaker of the Ministry of defense of Ukraine on ATO Andrei Lysenko, UNIAN reports.

“Under the pretext of search and neutralization of members of the so-called “Ukrainian sabotage-reconnaissance groups” in Luhansk FSB of the Russian Federation together with representatives of the so-called “MGB DNR” conducted the identification and arrest of individuals associated with the former leadership of “LNR”, – he stressed.

According to Lysenko, the arrests carried out among the representatives of “law enforcement authorities LC” and leaders of the so-called 2nd “army corps”.

“To justify their actions and create a favorable information background for such activities by the Russian intelligence services spread the message about mining of administrative buildings”, – said the representative of the Ministry of defense.

We will remind, on November 21, the center of the occupied Lugansk blocked by men with guns. Local social networks said the reason for the conflict between the leader “LNR” Igor Plotnitsky and the head of the so-called “Ministry of internal Affairs of LNR” Igor Cornet. The fight started a month ago – Carpenter, accused the Cornet that he was unable to prevent a number of sabotage against the militants. And asked to leave illegally seized from a luganchanka apartment. Carpenter through the so-called court dismissed the Cornet. And then he barricaded himself in his office in the company of former Berkut officers. The building, and along the entire center of the occupied city, was surrounded by supporters Carpenter on the armored vehicles with small arms and rocket-propelled grenades.

On 23 November it became known that the leader “LNR” Igor Carpenter left the occupied Lugansk and arrived in Moscow. The Network has published a video of Carpenter’s arrival in Moscow. In the Russian capital the head of the Luhansk terrorists arrived with a small bag.