Occupants in the Crimea make lists of traitors of Ukraine, to register their apartments 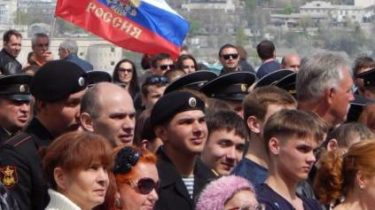 Occupants in the Crimea are lists of persons who have served in the Armed forces of Ukraine until 18 March 2014 on the Peninsula, with a view to addressing the issue of their registration at the place of residence.

About it on December 1, reported the press service of the “government” of the annexed Crimea, the publication of the Crimea. Realities.

“Given the fact that the lack of registration entails the inconvenience not only to former servicemen, but also members of their families, to complete all procedures required in the shortest possible time. So, now together with the military commissariats are working on collecting a list of persons passing military service in military units stationed until March 18, 2014 on the territories of Crimea and Sevastopol,” – said “Deputy Prime Minister” of Crimea Igor Mickle.

According to him, former Ukrainian military, who have received passports of the citizen of Russia, “have the right to register their place of residence at the military Commissariat, located on the territory of their residence.”

Earlier, the Russian government has allowed former Ukrainian military personnel to register in apartments and houses military camps of the Crimea. According to some, we are talking about approximately 1.5-2 thousand people.

Recall that in January in Ukraine was first convicted soldier who defected to the Russia – Lieutenant Colonel Taras Senecac received 8 years of imprisonment for treason and desertion. After the occupation of the Crimea, he was working as a Deputy head of the military sanatorium “Sudak” in the Russian army. He was detained at a checkpoint Ukrainian border guards, when the Colonel went to the mainland of Ukraine to sell the car. He later changed his testimony and stated that he was going to grandma’s funeral, but, as found by military prosecutors, it was not true.