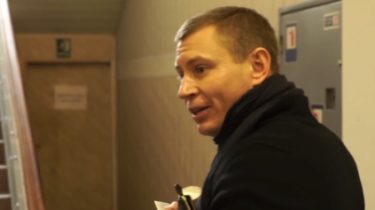 Mother-in-law of the head of the asset management Department of the National police of Ivan Naumov despite the official poverty turned out to be the owner of luxury cars and property valued at half a million dollars.

This is stated in the investigation, “Our Pennies”.

It is noted that Tatiana Zachinyaeva in 2017 acquired three land plots with a total area of 39 acres on the banks of the bypass channel Kiev reservoir. Market value of the land here is 2.5 thousand dollars for a hundred, that is, the price of all the plots Zachinaeva shall be of 97.5 thousand dollars.

Mother-in-law Naumov is also the owner of land is 36 acres, which are located nearby, on the banks of the Dnieper. Parcels acquired in different years, their market value shall be 90 thousand dollars. In 2012, the land began to build the house. According to the architects, the cost of a 5-storey “box” should be about 450 thousand dollars.

Also Tatyana Zachinaeva found two sites in the village of Rybakovk of the Nikolaev area on the Black sea. In 2013, she has purchased 40 acres of land, the total market value which should be about 40 thousand dollars.

In addition, in February 2017 Tatiana Zachinyaeva became the owner of a luxury Maserati Levante 2016 vypuska. Authorized dealer these cars are worth 3 million UAH. it is 110 thousand dollars. Now this machine is for sale

Official income mother-in-law superintendent of national police of more than modest over the last five years, she received only 10.5 thousand UAH. Zachinaeva is co-owner of five private companies, but none of them bring considerable profits.

Ivan Naumov declined to comment on the status of Tiffany, on the grounds that they are not personal.

“Where did she get all of these things – ask her. If she lived with me, I would love declared, would show everything right”, he said.

Head of Department for property management of NHRIs Ivan Naumov until the mid-2000s he worked in law enforcement bodies of Donetsk, and later was transferred to Kiev, and in 2012 received a position in the Vinnytsia region – first head of the Department of public service on fight against economic crimes, and since April 2014 – Deputy chief of UMVD of area. Then he returned to Kiev, having received the position of head of Department of material security of the Ministry of interior of Ukraine, and now of the asset management Department of the National police of Ukraine.

Wife NuMOV, according to his own returns for the last three years, was not working. Only income over this period of time she received in 2015 from the sale of the car for 580 thousand UAH. Valentina Naumova listed as a co-owner of several private companies, but neither one of them did not declared the profits.

On Naumov was was car Volkswagen Touareg (2011) and a motorcycle Harley-Davidson Vrscf (2009). Now the car is sold instead of purchasing new of the same model, but 2017 V. a car from an authorized dealer is under 1.5 million.

We will remind, people’s deputies, judges and police officers – representatives of these categories among other often need to check the physical and legal persons who apply to the National Agency for prevention of corruption. The head of the Department Natalia Korchak said that now most of the checks returns starts according to information received from physical and legal persons with the above facts about the likely offences to reflect incorrect data.