“Some Latin American carnival.” NABOO conflict with the GPU and the SBU after the failure of the operation in GMS 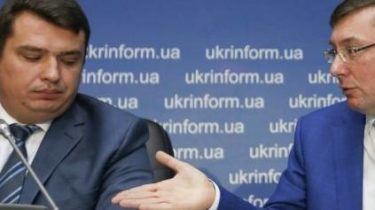 It should be a classy operation. By the way, it is similar to the sensational “amber” thing, but more importantly, because we are talking about the real threat to national security. Eight months ago, a group of undercover officers by the National anti-corruption Bureau began to unravel the tangle of cunning at the State migration service. There was suspicion that the leadership of Gosmigratsii right and left sells granting of Ukrainian citizenship and related statuses. During the operation an officer of the NAB Sergei Boyarsky trusting to the first Deputy of the migration service Dina Emahool and was able to secretly record video and audiocasettes criminal intentions official. In particular, they talked about the illegal granting of citizenship to businessman from Iran, according to a story TSN.Week.

Thread deduced the secret agents for a group in the middle of the service, at least in this say yet. However, things went exactly the opposite. It turned out that the clerk had been warned that watching her NABOO and the work of anti-corruption bodies turned against them.

“What would have been a secret operation, unfortunately, the data about which communication channels, information is collected on this operation regarding a particular person, unfortunately, our colleagues in the security Service of Ukraine. This information was used to recruit this person involved in the future, using a formal statement about the mythical provocation of a bribe to sabotage this deal”, – said the head of the NABOO Sytnyk.

Field investigators of SBU and prosecutors of the Prosecutor General detained the suspicious clerk, and the undercover agent. The Prosecutor General’s office revealed the names and addresses of several secret agents and demonstrated a safe space NABOO. This is called the joint operation of the SBU and the GPU to prevent illegal actions of employees of the National anti-corruption Bureau. As explained to the society the essence of the crime lies in the fact that the secret agent was offered a bribe to the official, and provoked her to receive it. Everyone could even see the operative video. According to the Prosecutor General’s office, the agent offered the official alcohol, which is unacceptable in the field.

Sytnik accused Sbushnikov in cynical behavior and damage of property during the searches, detectives NABOO

“Different options were offered: drink her wine, but something stronger… intimate questions. I think that no one would want months agents tried to squeeze through the vodka, the sex or the drugs these or those words from someone,” said Prosecutor General Yury Lutsenko.

Provocation of a bribe really is illegal in Ukraine. Article 370 of the Criminal code describes in detail what the provocation and in particular the provocation on the part of law enforcement. It is a still more grievous offence which entails a rather serious punishment – financial and imprisonment. We don’t know how in fact, the court, if it did come, exactly qualifies the situation, but corruption is so serious an evil that a number of developed countries said controlled provocation of bribes to officials of their mandatory effective tool. Talked about this at the time, and President Poroshenko.

“More and more I think about the necessity of introducing such procedural steps as a provocation bribes. It is very simple. This is when specially trained and motivated people under the guise of asylum check every official on the propensity to take. Tool a lot of what is considered to be contradictory, but it will definitely increase the pressure on corrupt officials,” – said the President Petro Poroshenko in 2015.

However society is now embarrassed not so much whether rights regular agent NABOO, and the fact that the people sounds like a war of the security forces among themselves. It is now clearly stated that against the anti-corruption Bureau conducted a joint operation by the SBU and the GPU. Leader of NABOO not called on the carpet to the Prosecutor General, the SBU did not apply to the requirement to stop illegal actions. The Bureau decided to catch on the hot. Technically the official that gave the bribe, was also a secret agent of the security Service.

The security service does not comment on the scandal, the main speaker is attorney General.

The President criticized the scandal: “the Noise of screams and feathers so many times that the action is reminiscent of a Latin American carnival.”

“Puzzling position of individual heads of state about what is happening. Some used the terminology: “feathers flying”, an interdepartmental war. No interdepartmental war. All this action, all of these diversions, all of these attacks, it’s the feeling that the punishment is already so close that if something is do not stop anti-corruption reform, this will become a reality in the near future”, – said Artem Sytnik.

Worst of all, this whole scandal has occurred in parallel with the visit to Ukraine of representatives of the expert Council of Europe’s GRECO anti-corruption monitoring. So, as of today, have thwarted the anti-corruption operation, the identified secret agents and a threat to the fulfilment of international obligations of the state regarding the real struggle against bribery.

The West clearly supports the NABU. “Ukraine must ensure, not to undermine the independence and effectiveness of newly created anti-corruption agencies… Any attempt to undermine the NAB questioned the real political will of Ukraine to the fight against corruption. NABOO should be protected from undue influence and pressure to continue his work as resolutely and productively, as it was until now,” said Marin Mrcela, President of the Group of States against corruption of the Council of Europe GRECO.

The GPU has disclosed the name of “agent Catherine” from NABOO

“Amazed by the dedication of professionals, a sense of mission from NABOO and SAP. Ukrainians should be proud of these heroes who are fighting corruption – the biggest problem of Ukraine. Proud to be your partners,” – said U.S. Ambassador Marie Yovanovitch

It is unknown whether there is enough collected NABOO evidence to prosecute the leadership of the migration service. It is also difficult to predict what the outcome of the case against officer Sergei Boyarsky and possibly other undercover officers of the Bureau. Definitely we can say about the surge of public resistance to the anti-corruption bodies. Ukraine warned about this, but the political system was unprepared to hear specific names of this resistance.