Throwing snowballs and wanted to set up the tent. Details the violent dispersal of a peaceful rally near the interior Ministry 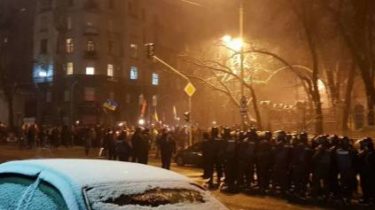 Wednesday evening, November 29, near the building of the Ministry of internal Affairs of Ukraine in Kiev clashes. There came the peaceful rally, which takes place on the occasion of the 4th anniversary of the violent dispersal of students during Euromaidan.

When a convoy of about 200 people approached the Ministry building, they were met by a cordon of police officers. The activists wanted to set up a tent and started throwing flares at police and firecrackers. The police began to disperse them with batons, tear gas was released. When drove the protesters about 100 metres, the militiamen lined up in the new and living cordon. About it from a place of events reports TSN journalist Ivan Grebenyuk.

After activists started to throw snowballs at the police is provoked new dispersal.

Did anyone injury is still unknown. The chief of police of Kiev Andrey Krishchenko TSN reported that the police detained four participants of the action, currently the question about their adminotvetstvennosti.

“Today in Kiev held a rally, so the police, according to the submitted to the Kyiv city state administration the application, provides law and order and security both organizers and participants. Militiamen accompanied the column from Independence square to the building of the Ministry of internal Affairs. There, activists have used the pyrotechnics. In addition, a few people tried to set fire to a military smoke grenade. So the police stopped the offense. The result has detained four people, they were taken to the police Department for questioning, establishment of all circumstances of incident and drawing up administrative materials. In addition, the police invited the organizer of the event to determine the causes of violation of order of promotion,” he voiced his version of events in the Department of communication of the police of Kiev.

Later it became known that the detainees were released.

“Four of the protesters who were taken to the police Department, made administrative reports under article 173 (small hooliganism) code of Ukraine about administrative offenses and released”, – said the police.

Recall, people first gathered in Independence square. From there they marched to the presidential Administration. There demanded the authorities to investigate the crimes of the Maidan, because almost none of them punished. Earlier in the Prosecutor General’s office reported that a prisoner only has one aunt.

The power of the activists are not heard – because it was not allowed law enforcement officers. For action monitor national guardsmen, members of riot police, patrol. Clashes between protesters and police near the presidential Administration was not only a verbal altercation.

Then the protesters went in convoy to the building of the interior Ministry, where clashes broke out.

At 21:00 scheduled event near the stele of Independence on the Maidan in Kiev. There will be to remember the events of 4 years ago.

Videofemale procession in the centre of Kiev turned into clashes