In Kiev under the building of the police, the unrest began after the arrest of the driver on avtonomera with a gun 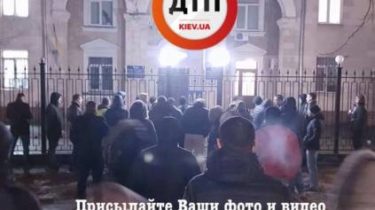 Dozens of men staged a protest under the walls of the Solomyansky district police station in Kyiv. It happened after the patrol police was arrested and taken to the station the two drivers.

According to information from the community on the evening of 30 November, the driver of the Mitsubishi Pajero has violated the rules of the road. The patrol police began to pursue him and eventually stopped. The driver refused to produce documents and was called to the scene of his son. He came to the Skoda with the numbers of the Swiss registration.

Between drivers and police, the conflict occurred, during which the drivers were allegedly beaten. Bag son also found a gun, but the man refused to provide documents to it.

As a result of drivers arrested for malicious disobedience to law enforcement and brought in Solomenskiy regional Department.

Recall, September 6 the owner of the car on avtonomera staged a protest action under the Verkhovna Rada. According to the organizers, it was attended by about 5 thousand people, who demanded the legalization of uncleared cars. The protesters want of customs clearance of cars available for Ukrainians and the legalization of already imported in Ukraine machines.