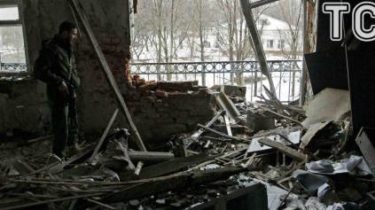 The militants of illegal armed groups 13 times violated the ceasefire in the zone of the antiterrorist operation in the Donetsk and Lugansk regions. They used mortars, are prohibited by the Minsk agreements.

In the direction of Donetsk the Pro-Russian mercenaries fired more than fifty minutes, 82 gauge at the positions of Ukrainian troops near Avdiivka and opytne, near the occupied Donetsk. Near Talakivka separatists fired rocket-propelled grenades and heavy machine guns.

The epicenter is the direction of Lugansk. The militants again fired from mortars of a caliber of 120 mm military positions in the area of Novozvanovka, Katerinovka and May. From grenade launchers fired on Crimean and Svetlodarsk from the armament of the BMP – Zaitsev, and from small arms – strongholds near the APU Lobacheve and Novoluganskogo.

The situation in the ATO zone remains complicated. On the last day of the cannon of 152 mm caliber artillery gunmen fired Through the in the area of Svetlodarsk arc. Here the illegal armed groups do not stop the enhanced intelligence and the organization of sabotage. More than five hours of continued fighting near Luhansk. Ukrainian armed forces repelled the attack militants. The latter, retreating, left on the battlefield two wounded and one dead. The headquarters of the ATO reported that the Ukrainian position was attacked by a sabotage group from the 7-th separate motorized rifle brigade of the 2nd Army corps of the 8th Army of the southern military district of Russia.