A fatal accident with a wagon on the outskirts of Kiev: prichindalov collision of cars is still not installed 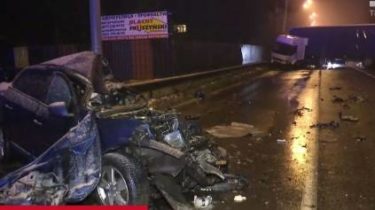 A frontal collision of the loaded truck and cars on the outskirts of Kiev broke off one human life and blocked the highway for several hours. The accident killed the driver of a smaller car, and the other party to the accident the investigators questioned and released, according to a story TSN.19:30.

The driver of the truck, the novel says that it all happened at about 14:00 instantly and unexpectedly, when the road was free, and the speed of both machines is not too high – about 80 km/h. “When approaching its pull start I just in the forehead,” says the driver of the truck. After the collision, the car pushed back, and the truck with damaged chassis became unmanageable and was able to stop once he was across the road and ran into a chipper. “He told me the whole front end knocked out. After the impact I ran to him, see, everything. 28 years – was not such,” – says the man.

VideotP on the outskirts of Kiev: a truck driver told about his experiences

Rescuers shut down the gas equipment in the car and secured the fuel and lubricants that flowed. Then, work to become law enforcement officers, “the Truck damaged the front part, in connection with what you need to find a vehicle that could get him off the road,” the puzzled patrol Dmitry Matveenko. To clear the way police have begun only when have completed all measurements and interrogations of witnesses of the accident. To call, why the car suddenly drove toward the truck, no one was able.

In Kiev, the truck caught on wire and crashed into a parked car

As previously reported, on the Minsk highway near Kiev faced truck and Renault car Renault. In result of road accident the driver of the car died at the scene, traffic on the road in both directions blocked.