Hungary has accused Ukraine in violation of its obligations to NATO 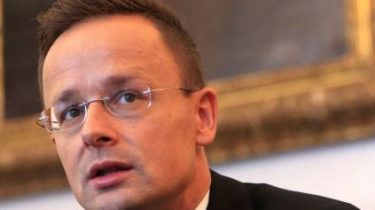 The Ministry of foreign Affairs of Hungary said that Ukraine has allegedly violated the obligations to NATO after the adoption of the new law on education.

This is stated in the statement published on the website of the press center of foreign Ministry of Hungary.

“In its annual national programme, Ukraine has committed itself to respect and promote minority rights, but the adoption of a new Law on education is absolutely contrary to it. By adopting the Law on education, Ukraine does not fulfill the points of bilateral relations with Hungary, as well as its international obligations”, – said the head of the foreign Ministry of Hungary Peter Siarto.

The report also says that Ukraine allegedly has to “restart” relations with NATO and to withdraw the education law. The Minister also added that Hungary would reconsider its statements regarding the Ukrainian European integration processes, if the law is overturned.

“If Ukraine refuses to act, Hungary will again become one of the most ardent supporters of European and Euro-Atlantic aspirations of Ukraine,” – said Siyyarto.

Videoclipsin went to Transcarpathia, to negotiate the transition of schools into learning Ukrainian

We will remind, the Minister of foreign Affairs Pavlo Klimkin agreed to remove the linguistic tension and for this purpose visited Transcarpathia.