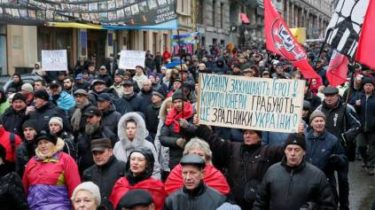 The organizers of the”March for impeachment” has completed the rally on Maidan Nezalezhnosti and began to move in the direction of prison in the Askold lane to support Mikheil Saakashvili, writes UNIAN.

It is noted that this was the scene on independence, said one of the leaders of the party “new force Movement” David Sakvarelidze.

“At the end of our meeting we invite everyone to go to SBU to and we had a lot Misha heard that he’s not alone,” he said.

At the same time the people’s Deputy Yegor Sobolev proposed to create a national salvation Committee.

“I propose to create a national salvation Committee of people with a crystal clear reputation and enduring spirit and heart, which from Kiev to the last town will help to organize society that will not allow you to break the law will save the country from turmoil in this crucial period,” he said.

We will remind, in the morning in Kiev was held a March in favour of a bill of impeachment, which was conducted by supporters of Mikheil Saakashvili. Protesters who took to the streets of the capital, demanded the release of the party leader “the new forces Movement” Mikheil Saakashvili and urged President Poroshenko and Russia’s Prosecutor General Yury Lutsenko to resign.

Saakashvili himself is now in prison in the Askold lanewhere he was taken after arrest by the police late in the evening of 8 December.