Dubious investors from “Family” to destroy the monument of Russia. How to protect excavations on Mail 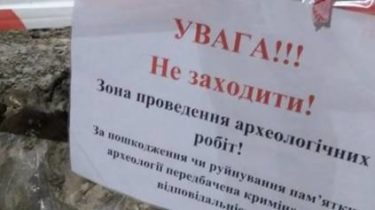 A few years ago in Kiev, at the Postal square during the reconstruction was across the street 11-12 century. In this area was the Baptism of Rus.

As stated in the story TSN.Week, it could all go away, because the investor who builds under Plasa shopping center, should have a plate, in fact, destroying the previously found findings.

According to the Director of the Centre of archaeology Kyiv Mykhailo Sahaidak, an interesting complex, which was discovered in early excavations. It was found in 11 burials. This place in normal countries, was surrounded by a huge fence and unacceptable to anyone but the archaeologists. Found sheds much light on the history of the already expressed hypothesis that these excavated landscapes, people went to the scene of the Baptism of Rus. Here occurred the birth of the Ukrainians, and therefore, it is a sacred place for the state.

“Is the area of the fence line of the fence. On the other side of the street, and on this side was that it all built up. HOMESTEAD. For example, there is the collapse of the furnace. This furnace, the object is fired approximately at the turn of 12-13 centuries. A very powerful fire,” said Sagaidak.

In the annals about this time reminded of a powerful attack on Kiev Russian princes, who burned the Hem.

Archaeologist Michael Sagaydak said that with the beginning of reconstruction of the Post here came many officers, who promised support. “Who protects his history, he has no future. Clearly, it must be saved,” – said the mayor of Kiev Vitali Klitschko.

But now part of the excavation was under threat. Corruption destroys a thousand years of history literally in pieces.

Eerie find: Ivano-Frankivsk unearthed a mass grave of victims of the NKVD

The history of the reconstruction of the Postal square stretches from the beginning of the 2000s. Began work in 2013. At the time of Yanukovych Prime Minister Mykola Azarov, Kiev is literally littered various interchanges for the budget. Billions of dollars in tenders awarded to his company. To improve the traffic in this place – proposed to cut a tunnel and build the overpass. Under the area under the guise of reconstruction of the interchange should be located shopping center.

After announcing an investment contest to create a company “Hansford Ukraine”. Its parent company – “Hansford Impleks”, which is a founder of OOO “Vias Groups”, last registered in Brovary at the same address with another firm “house of the Forester”, which was owned by the residence of Yanukovych in Sukholuchye. At the same address in Brovary was registered firm “Energo seven”, led by Marina Pelago, the wife of the head of the State administration Andriy Kravets. The latter is called a caretaker Yanukovych and the person of the former head of presidential administration Sergey Levochkin. Now firms out of the orbit of Andriy Kravets has changed his residence.

Excavated graves in the river remained open at night

Former officials confirmed that the investment part of the Post then gave the free kick. The investment project was estimated at 76 million, of which 5% or nearly four million hryvnias, the investor had to pay the city for the development. In fact, for these funds, thousands of square meters of the area at that time was transferred into private ownership free kick. So, city for half a billion constructing the interchange and tunnel, and the investor shopping center under the square. It was then and stumbled on the fragments of the estates and streets.

Despite this, the technique worked and hammered piles future underground shopping center. Now found archaeology is on the verge of destruction.

Between floors you need to install a monolithic slab. In addition to the function of the floor it will fulfill the function of fixing the piles. Dig down for the construction of another floor anymore, because the temporary columns, without installing a monolithic slab, just collapse together with the area. However, the installation of this plate literally cuts all the finds out excavations under it.

Archaeologists propose to make here a Museum. In archaeology, in situ impact the artifacts that have not been moved from its original location and preserved right there. Similar museums exist in many countries of the world. In particular, the famous Acropolis in Athens. Such suggested and the Austrian archaeologist who was here.

The position of the Builder – all the artifacts to make, preserve, and then placed in a room 10 by 10. The investor took the Museum a little more than 100 square meters. He claims the project is approved by all. The representative of the investor refused to meet. The Director of “Hansford Ukraine” Marina Tkachenko has not responded to the invitation to meet. The position of the Builder – plate mounting, what is confirmed by the Institute of building structures.

Deputy Director of the establishment confirmed – without the plate digging down impossible. But not on camera says – possible options. “As it is necessary inside. Just that no one did. This excavation method was once adopted, the project developed… Theoretically possible other options for development. But you need to think, to have the calculations,” – said the official.

Options for how to consolidate area and do not destroy the archaeology possible. In turn, the investor will have to pull the archaeology and to finish minus the second floor, but then about underground Museum you can forget.

In the Directorate of construction of road constructions Kiev said that conditions dictated by the investor who makes the project.

For the conservation of places of baptism of Rus and devices where the Museum said the Patriarch. A petition to the mayor Klitschko has signed thousands of Kiev.

Recently, a meeting of the culture Committee of the Parliament recommended not to install the plate and make it an underground Museum. As stated by the Deputy mayor of Kiev Alexey Reznikov, next week will start looking for an alternative to plate and among the invited design engineers. This will help the archaeologists to continue the excavations and walk to the 11th century.

But in addition to the plate there is another problem. Over the years the Institute of archaeology of NAS are not adopted and have not developed technology of preservation of a tree that lay in the ground for a long time. Therefore, it is necessary to invite experts from abroad. Meanwhile, the findings once again filled with water. Clearly, issues of the Postal square – not even the local and state level. Perhaps the state should interfere in this process because there is a risk that you will lose much more than old foundations and fences.