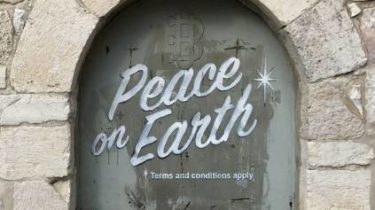 Tourist Jason Stelios, Barkingside, England, claims that he accidentally photographed the elusive street artist Banksy, who never got in camera lenses. On Tuesday, December 12, according to British newspaper Daily Mail. An unexpected encounter with a legend of street art was held in Bethlehem, Palestine.

The guy says: “last week I came out of the Church of the Milk grotto through the back yard and saw a man that draws a star on the door, using a stencil”. 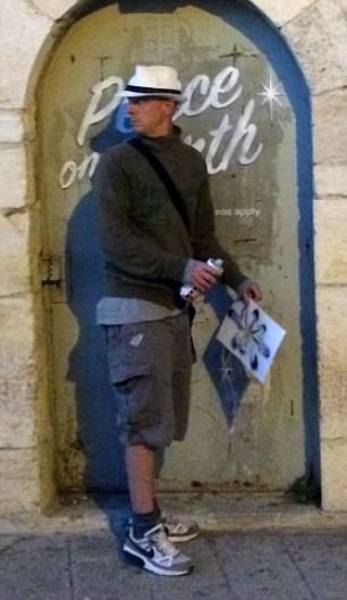 Jason admitted that he didn’t expect to see a famous artist. “I thought it was the usual street-artist and photographed it,” he explains.

Later, the tourist noticed a man in similar clothes that went with the presentation АlterNativity, which was held at the hotel Walled Off Sunday, December 3.

“I talked to people afterward and they said they want to see new artwork of Banksy, which I didn’t.”

When Stelios went to the site of Banksy, he realized that the shot of the artist at work. On the main page was a photograph of a drawing “Peace on earth”.

“I’m not a fan of street art, but I am amazed that saw Banksy in action. Here he helps people with their art”.

Banksy – star underground street art, political activist and Director. The identity of the artist is not installed, because Banksy avoids camera lenses and attention of fans. The artist goes unnoticed, but his work sold for hundreds of thousands of dollars. Due to the acute social themes and talent of the artist, Banksy has gained popularity in England, and later throughout the world.

Antidialer artist Banksy will become a haven for refugees

By assumption the media, in the pictures of Mr. Stelios not Banksy, a street artist James Ames, known as Амеѕ72. He presented his works at exhibitions along with Banksy.

Earlier media reported that the name Banksy is hiding the soloist of the musical group Massive Attack Robert ” 3D ” Del Naja. Politicised graffiti created by Banksy, appeared frequently in cities where musical group gave concerts. It is assumed that Banksy is not only an independent artist but a whole team of artists.

Recently, the famous British DJ Goldie accidentally called the name of Banksy in an interview. The musician said: “Take the rounded letters and write them Banksy on a t-shirt, and it’s done. It can be sold. No disrespect to Robert, he’s a brilliant artist.”