Near Lugansk terrorists fired 100 min for the Ukrainian fighters. A day in the area ATO 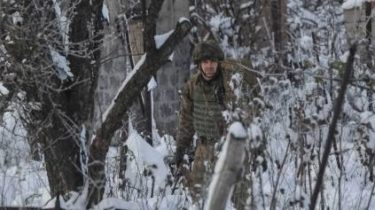 Over the past day in the Donbass were 22 violations of the cease – fire by militants. As a result of shelling none of the Ukrainian military was not injured.

At the Lugansk direction with the onset of dark pores terrorists intensified near the settlement Lugansk. From 21.00 until close to midnight they were every two minutes fired from mortars 120-mm and 82-mm for fortifications, and the Ukrainian military has released a total of nearly one hundred minutes from mortars fighters fired at military in Lozove, Crimean and Russian Federation. Near Trinity and Novoaleksandrovka carried out aiming the shelling of the Ukrainian strongholds of infantry fighting vehicles and infantry weapons.

#Topad #Foresnic #Donbas #spokesperson #statement the Construction of the Press center of staff ATO for December 11, 2017 has passed the day…

Posted by the Press center of staff ATO on Monday, December 11, 2017

On the Donetsk direction in the evening from 120-mm mortars they fired near the Water, and the same gun 82-caliber – near Birch. Near Bogdanovka violated the cease-fire from APCS and small arms.

Earlier it was reported that the militants yesterday, December 11, fired from “Grad” in the area of Avdeevka.