The state pulls from the pockets of Ukrainians huge sums through taxes. All kinds of penalties 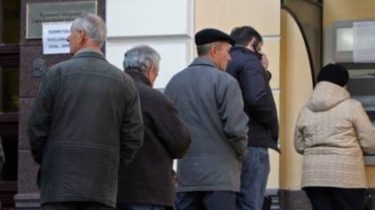 The average salary in Ukraine is UAH 7351. However, through taxation the large amounts occur in the state budget.

Those who receive the wages of white, 18% is paid by income tax for individuals and a 1.5% military duty. In terms of the average salary – this means minus 1433,45 UAH.

Khrushchev served his. How Ukrainians plan to relocate from dilapidated 5-storey houses

The employer the employee is even more expensive. To accrue 7 thousand hryvnias of a salary – your boss should pay a unified social contribution. 1600 hryvnias from the average fee spent on pensions, sick pay, accident. Even if none of the above did not happen – still I have to pay. So, the amount of tax-free is 8980, and provide hands on 5 917,55 UAH. It turns out that on the way to the Bank card, the state took a third (3050,45 UAH) from that given by the employer.

If you think that your relationship with government has stopped anything of the sort. It’s only the beginning, because there are other ways of paying.

For all purchases in stores Ukrainians pay not only the seller but also to the state. From products it is impossible to refuse, so the tax can not hide. In fact, this insidious VAT bite off of every purchase 20%.

The maintenance act. What you should know about the document, which men call “draconian”

Therefore, every fifth loaf of bread, every fifth egg, every fifth stick of sausage you have to give to the state. If you try all of this on the remnants of the average wage, it turns out is still minus 1200 hryvnia. And that’s assuming that none of the purchase were not spirits, because there is another tax – VAT plus another payment of excise duty. This clever collection includes not only the cost of alcohol and tobacco, fuel.

For all excisable goods, produced and sold in Ukraine, the government already wrote a check by 79.5 billion. Imported will be another 46 billion. If this amount split for each Ukrainian – get 250 hryvnia per month. Add here a couple of hryvnia for talking on a cell.

Thus, in the wallet after these contributions is the net amount – 4471 UAH.

The development of cinema in Ukraine: Poroshenko has simplified the taxation of cinematography

This is the main problem – we pay taxes quickly. It is about 70 thousand hryvnia per year of the average salary.

Ukraine is still fantastic, but for US – ordinary reality. The Americans fill out a tax return and with great respect to those who do not pay taxes. Maybe this practice would become a lifeline for us, because holding money in his hand, and then giving them fiscal, we would have much more thoroughly and tougher attitude to how the government spends them.