A blow to Novoluganskoe you will find a kindergarten, a hostel and 20 houses 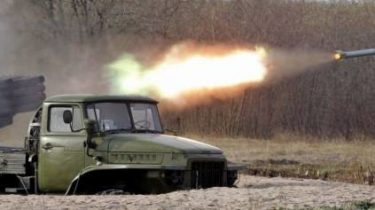 After Russian observers to monitor the ceasefire with Ukraine, fighters hit from the “Grad” Novoluganskoe. The attack occurred at about 17:00, at least three dozen missiles flew from the occupied Horlivka, says the story TSN.19:30.

Locals are wounded, two women were taken to the intensive care unit. In the village burning houses. “Found 8 houses with a direct hit of shells: 3 of them burned out, 2 out, 1 still trying to put out. Injured 4 people: two women and two men. They assist in Bakhmut and Svetlodarsk hospitals. One person was injured badly – he’s in surgery now. There is a chance of a second attack on the village. People are warned and you are in the shelter”, – announced via social media the Chairman of the Donetsk regional military-civil administration Pavlo zhebrivskyi. He later reported that damaged 20 houses and a dormitory, the roof of the kindergarten building, killed power lines.

The interior Ministry of Ukraine said that at the scene the police that document the consequences of the crime and provide assistance to residents. “Preliminary legal qualification – article 258 (terrorism) of the Criminal code of Ukraine. As of 18:40 it is known about four victims, two women and two men. In the village of deployed operational headquarters, the scene sent additional police,” – said the press service of the Ministry.

During the day on the front line killed three Ukrainian soldiers. In Zaitseve fighters were just in the dugout – because of the explosion killed two Transcarpathians and one soldier from Chernigov, who served in the 128th brigade. Another eight soldiers were wounded on the arc Svetlodarsk. The headquarters of the ATO predicts increased pressure of militants in connection with the decision of Russia to remove its military from the joint coordination center and cease-fire.