Saakashvili has denied information about the negotiations with Poroshenko 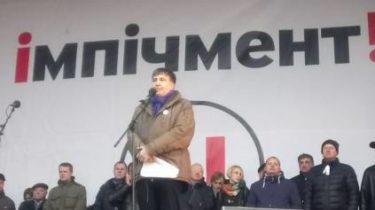 The leader of the “Movement novih forces,” Mikheil Saakashvili has denied that he tried to negotiate with the President of Ukraine Petro Poroshenko, and called her fake.

He said this during the “March for impeachment” on December 17, the “Gordon”.

“I want to respond to those gullible people who say… Saakashvili agreed with the huckster Poroshenko. Whatever fakes you did not – here I am in front of you. Live Mikhail Saakashvili. And I’m telling you – we are ready to negotiate and we are ready to negotiate only one – about retirement, about moving away from power, the restoration of the right of dignity of the Ukrainian people, about the return of the loot… and that they left Ukraine alone,” said Saakashvili.

The politician said he was ready to meet the President, but the cameras and in the presence of the people.

“Never, while I live, I do not agree with the huckster about some small parties and dogovornyak. I never agree with them about the money,” – said Saakashvili.

Earlier Dnia citing its own sources in the entourage Poroshenko reported that Mikheil Saakashvili has invited President Poroshenko to make peace. According to the interlocutor, Saakashvili gave Poroshenko letter head to heads they had. “Poroshenko has this letter. Mike offers de-escalation,” – said a senior source.