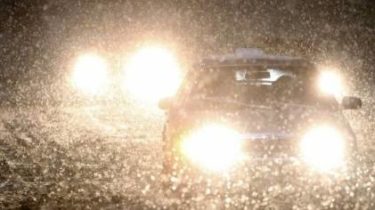 The transport situation in Kiev has deteriorated to dinner.

The city is in continuous traffic jams that paralyzed major transportation arteries.

The worst situation is observed on the Avenue of Victory towards the center. Also barely riding cars on the Ring in both directions. The reason is the large number of accidents and the work of road services.

Snowfall in Kiev. Text online of consequences of bad weather

In the direction of Petrovka transport is almost not moving. From Chokolivka on the street Helen Teligi up the Avenue of forward speed does not exceed 3 km/h. Close to the airport “Kiev” the situation is not better – traffic jams paralyzed the Sevastopol area. From Zhytomyr highway to the center is also a dead congestion.

Better situation on the Left Bank.

We will remind, in the morning the city was covered with snow. On the roads traffic jams were formed. Large vehicles are not allowed in the city. Meanwhile, on the capital’s roads left 450 units of special equipment, which is struggling with bad weather.

Later, the capital airport “Kyiv” in Zhulyany, moved some of the flights to Boryspil.