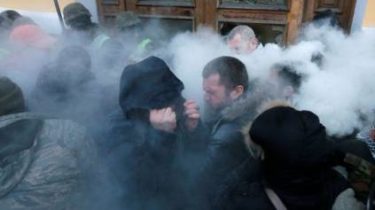 Sunday, December 17, supporters of Mikheil Saakashvili, led by their leader gave another “March with the impeachment”. During his speech from the stage , Saakashvili said that in the October Palace will be the “headquarters” of the protest, after which along with the protesters went there.

At that time the Palace was a jazz concert (some Pro-government MPs wrote that there was a new year children’s matinee), so on the way the protesters were the national guardsmen and police. In the end, there was a big scuffle, during which the parties to the conflict used the gas, firecrackers and even a log.

In the end, injured 32 police officers and around 20 demonstrators, police opened three criminal proceedings. The protesters failed to enter the October Palace, and they returned to their encampment near the Verkhovna Rada.

What was it and why, didn’t understand even those who are on the same side with Saakashvili.

In particular, people’s Deputy Serhiy Leshchenko, who took part in the “March for impeachment” as a member of the protesters, said he was very surprised by the course of events. “This act can destroy the remnants of trust among the political supporters and to alienate society”, – he wrote in Facebook.

As someone who came to the chamber today as a member of the party and was among the people, I, to put it mildly…

The party Leshchenko, Mustafa Nayem also don’t understand why the assault of the October Palace. “Now such actions undermine the credibility of street actions and discrediting protest as a phenomenon. And regardless of the motivation of the initiators, this is a very easy pass for those who are interested in preserving the status quo,” the MP said.

I understand the Chamber as a protest of disgruntled citizens. In March of involved people with different agenda and requirements, shit…

Yegor Sobolev advised “before you call people from the scene, it is necessary to think, where you call them. Each step should be calculated and explained to people on time”.

About today’s rally on independence square and clashes at the October Palace: 1. Before calling people from the scene, it is necessary to think…

MPs included in the parliamentary coalition, accusing Saakashvili and his supporters that they “stormed the October Palace, when the children were there”.

The representative of the “popular front” Anton Gerashchenko says that “a group of militants Saakashvili tried to seize the Palace, when there were hundreds of adults and children.” He noted that there was a Christmas party, although in the poster the institutions we are talking only about the jazz concert.

Published by the Anton Gerashchenko 17 Dec 2017

The people’s Deputy from “BPP” Irina Gerashchenko believes that the deputies, who bailed Saakashvili should “apologize to society and personally to parents and children, blocked the aggressive idiots in the October”.

On the Maidan, seized stores and facilities, which hosted children’s parties. This – antimaydan. All involved in terroristic…

In the dry salesco. Petro clearly we had something wrong. I’m talking about TSE wrote long ago. Curiously – povertythe of dopisy. Ale MSA Robit DVC not the same. Our situation is simple: viyna on Shad. Okupowanej Cream. Us sprobe to move the front in Kyiv – zlocin.

Glenn Miller Orchestra – Concert at 19.00 in the October Palace started as expected. After the first “assault” Saakashvili companions of the Palace during the day of the concert-jazz great! The chief of police, the Prince came to the concert. Mike didn’t want to admit this, because he knew that: pic.twitter.com/yrS63QYRaK

When Saakashvili was going to take the Winter Zhovtnevy, he hardly knew that this round will lose power and…

First you announce from the stage that all need to go to the October Palace there to arrange the headquarters, under the stream itself pretentious idea…