Awesome comeback: Kiev found his dog a year after the mysterious disappearance 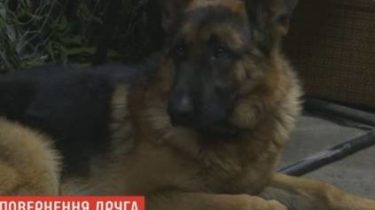 Shepherd Tyson a year after the disappearance, came back home through social networks, volunteers and rescuers, when its owner has already lost hope to see a friend.

“Beware of the dog” – the sign on the door Eugene is not removed even after the disappearance of Tyson. Yesterday shepherd again inside. Tyson lies in a corner of the Studio, its owner and from which the dog had disappeared a six-month old puppy. Eugene was only a photo.

“I wasn’t expecting already. After three months we realized that this is all” – says the owner of Tyson.

Where was he all this time, the owner is not. Own name, the dog remembers, but people are watching cautiously.

Kiev found the stolen dog after two and a half years

“The dog has changed, yet it is not. Unfortunately, or fortunately, he can’t tell where he was,” regretted Eugene.

His friend Jack again saw two days ago in the photos online. Before you get to the eyes of the owner, the publication gathered a half thousand posts. Photo by Tyson posted on Facebook volunteers, who accidentally found the dog in the Park.

The hound of the Valar and his mistress Helen Tyson approached himself, on the left Bank, ten kilometers away from the Studio. Shepherd she was guarded by four hours, in two nights have arrived rescuers who caught the dog and took her to the clinic. Then posted pictures of shepherds in the Network. And to focus on the strange collar

“The collar they zaklepanje some screws and it was difficult to remove. And here so many months he was running around with this collar. There was no doubt that it’s the same dog,” says one of the volunteer groups.

Now the dog turns his nose up at a meat soup. And looking at breadwinners with sad eyes. Vets say, still recovering from the sedative. He believes that all ahead.

“I would certainly like a fairy tale, in films that he immediately recognized and ran, but this did not happen. Nothing will remember”, – said Eugene.