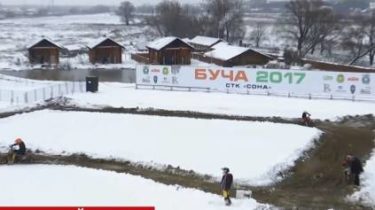 Motorcyclists staged a protest against the actions of Prosecutor’s office of Kiev region. This organ they accused of complicity in the attempts to select a training track in Bucha near Kiev, says the story TSN.19:30.

Motorcycle complex in Bucha is the only place where you can prepare for international competitions, there are trained the Champions of motocross and prize-winners of Championships in this sport. “We in Kiev two such tracks. But this is more like a European. Care about her”, – said the athlete Vladimir Voloshin. Shock for motorcyclists was the news that the track may close, because the earth has become the object of a criminal case instigated by the Prosecutor of the Kiev region. Investigators believe that eight years ago buchansky city Council gave the land on lease illegally.

Video settings Bucha trying to take the track in athletics

Athletes say that they want to develop the site, and follow this to the investigators. Prosecutors claim that deribana land does not allow it. But in the mayoralty promise athletes never have to drive. Hundreds of Amateurs and professionals, adults and children, training in Bucha, came out to protest. 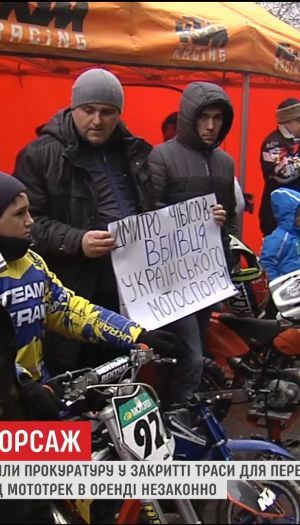 Coach says that after the uncertainty can break the European championship, which is scheduled here next year. “Most importantly, requests the international Federation, the identity of the land. In Romania eight years ago, passed the championship of Europe among juniors came to the competition, made run. Two hours before the event my uncle came and said: guys, what are you doing here? This is actually my land,” – said Sergey Pashinsky, who is the owner of the sports complex. The coach and the businessman suspects that the earth has eyes and powerful businessmen, and just want to build up.

Bucha is located at a distance of 15 km from Kiev, a square meter of housing in the town is 8-12 thousand. Next to monocomplex recently, a complex of skyscrapers, but the city Council don’t understand, where did the rumors about building. They show the General plan until 2065 and swear that the area is intended exclusively for athletes. “It’s selling land that cannot be used for residential development. Here already stated: the motocross track, sports-technical club “Sona”. Buchansky city Council claims to lessee of land has no”, – assured the representative of the municipality Anna Voznyuk.

But the claim is at the regional Prosecutor’s office, which is investigating a number of cases against mayor Anatoly Fedoruk. Investigators say they have nothing against motorcyclists, but the lease of land for the accommodation is illegal. “Legislation was required to obtain approval of the Cabinet of Ministers of Ukraine, who was the owner at that time,” explained Andrew Siwiec. After the biker protest to the Prosecutor’s office has promised to thoroughly study the situation and give a review before the end of this week.