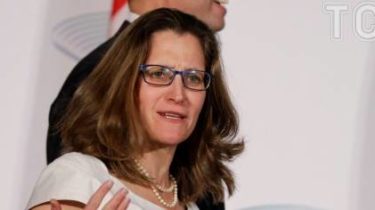 Ukraine, December 13, has the ability to go to Canada with a request for supply of arms. However, such applications Kyiv has not yet sent.

On this day, December 21, during his visit to Kyiv said the Minister of foreign Affairs of Canada Chrystia Freeland, “Interfax-Ukraine”.

“Technically, I’ll explain what we did: we have included Ukraine in the list of countries to which canadian plants are allowed to sell weapons. This is just the first step,” said Freeland.

She noted that if any country not on this list, it is prohibited to sell arms.

“Ukraine from December 13 is on the list, and we are very happy,” said the Minister.

Freeland noted that Canada is a very responsible approach to arms exports.

“We have to have a petition for the purchase of weapons, and then it goes into the process. From 13 December there were no requests, the process has not yet begun,” – said the Minister.