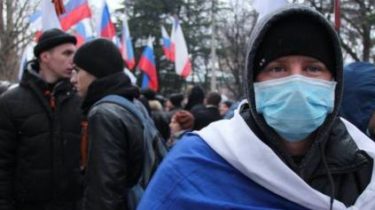 The main intelligence Directorate of the Russian Federation in 2014 launched a large-scale company of disinformation against Ukraine, when it became known that the ex-President of Ukraine Viktor Yanukovych fled the country amid mass protests on the Maidan. This campaign was part of the total propaganda offensive against the new government in Kiev and Pro-Western demonstrators. The same operation is foreshadowed Moscow’s actions during the US presidential elections two years later.

This writes the newspaper The Washington Post, citing a secret report of the GRU.

Videomusica the propaganda machine worked with a vengeance

The goal of the campaign was to influence key decision makers, and the General public. This in turn should pave the way for the Russian military action that was launched on 27 February 2014 with the seizure of the building of the Crimean Parliament by armed men, said in a secret report, intelligence obtained by The Washington Post. In the end, Crimea was annexed by Russia.

In Zaporozhye detained recruited by the Russian propagandist

The report also features information on the work of one team of the GRU for six days in 2014. Starting from the next day after the fall of Yanukovych, the military spies have created numerous fake accounts in social networks Facebook and Vkontakte. These fake characters were supposed to represent ordinary people from all over Ukraine, allegedly disillusioned with the opposition protests on the Maidan.

On Saturday evening, February 22 2014, man who called himself Ivan by Kalininym, published a review article in the British newspaper. It was a story about Ukrainian opposition leader and former Prime Minister Yulia Tymoshenko, who was released from prison that day.

“In Ukraine there was a coup,” wrote Galitsin English. “I live in Kiev. I was on the Maidan, but the peaceful protest ended two months ago, when we were displaced by armed nationalists. It’s a nightmare. The Nazis came to us 70 years after the Second world war. I don’t want such future for Ukraine.”

“We are at war”. Freeman blamed “Putin’s spy” in propaganda and lies

According to the documents of the GRU, Galitsin was created by the employee of the psychological service of the GRU. The account was created on February 22, he was used as a photo your profile photo Konstantin Yaroshenko, a convicted Russian drug smuggler serving a sentence in prison in the United States. Comments Galitsina has also appeared in other English-speaking publications.

According to the report, the command of the GRU has created more than 30 Ukrainian groups and accounts in social networks, as well as 25 “the leading English-language” publications.

Pretending to be ordinary Ukrainians, operatives of the GRU has also made comments directed to set a Pro-Russian citizens against the protesters, whom they called “zapadentsev”. One comment read: “Teams zapadentsev now in the way to Rob and kill us. It is quite clear that these people have nothing sacred”.

Protesters on Maidan were called “Nazis” and “fascists”.

Military spies also published physical threats on social media against supporters of Yanukovych in the South-East of Ukraine to support statements about what radical Ukrainians incited violence against Russians in the region. In one case, a fake character named Vova Kravets issued threats on Facebook against 14 politicians.

27 February, when the Crimean Parliament building has been captured, GRU has created four groups in Facebook and VK to encourage Crimeans support secession from Ukraine. “Using our accounts in Facebook, we have expanded comments, informing the population of the Crimean Peninsula about the threat from Nazi organizations”, – stated in the message of the GRU.

Propaganda and hacker attacks. The Pentagon revealed how Russia is trying to control the information field

GRU has created instructions for employees of psychological service to work in Facebook and these instructions were fairly simple. One piece of advice was that the operatives should not use his real picture: “You can search the photo in the Facebook. Find someone who has very few friends, and he is not an active user”.

In accordance with the report, GRU also used paid ads in Facebook to increase the popularity of their groups. It is reported that the group got almost 200 000 views in Facebook 27,. The content of these groups in other census groups in Facebook, Vkontakte and LiveJournal.

“It is difficult to assess the true impact of the information activities of the GRU in Ukraine. But military spies, of course, showed everyone in the best light to their superiors, giving this assessment: “the Vast majority of social network users agreed with the published arguments and upheld the position of the authors,” the author writes Ellen Nakashima.

Propaganda and Orthodoxy: how Russia is trying to prevent the accession of Macedonia to NATO investigation

We will remind, recently the first Secretary of the Permanent mission of Ukraine to the UN Oleg Nikolenko at the meeting of the Fourth Committee of the UNGA stated that the Russian propaganda with the participation of state media, as well as the systematic falsification of facts by the Kremlin fueled the hatred of Russians toward Ukraine and continues to deepen the conflict, which requires the international community’s response to the situation. Nikolenko noted that the Russian government has significantly limited the space for independent media, has strengthened control over the state media, turning them into powerful tools of state propaganda, which produce fake news.