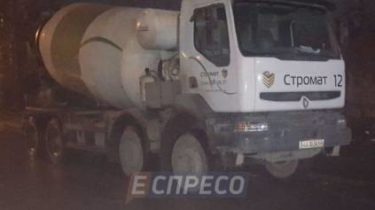 In Kiev there was a fatal accident in which the driver of the lorry hit and killed a young woman.

The accident occurred in the evening of 28 December, on the street sosninykh Families in the Svyatoshinsky district of the capital. Eyewitnesses said that the truck driver left the Parking lot, and the woman crossed the road in an unspecified place. The driver noticed the pedestrian and hit her.

In Kiev, a cement mixer crashed into a car of the French Embassy

According to Dtp.kiev.ua the lorry dragged the woman from 20 meters and stopped. Witnesses to the accident stopped the driver in the street Wheat, talked about what happened, and returned to the accident scene.

Espresso reports that the truck driver did not believe the witnesses of the incident and drove on. It was caught up by the police who stopped.

The female pedestrian died at the scene, with him she had no documents. On view dead for about 30 years.

Fatal accident near Kiev: concrete flew into the truck