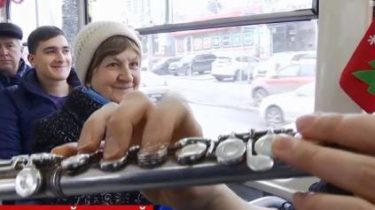 In the capital’s Podil there was a festive tram with toys, Santa Claus and musicians. The car in which those with the passengers sang carols and Christmas songs, gave a lot of smiles to the people of Kiev, says the story TSN.19:30.

The 18 tram route came on shift at 6:00 in the morning decorated with new year’s attributes, and the driver with 40 years of experience admitted that he was expecting this day for miracles. And they started to happen before dawn is not the first flight – sleepy and gloomy, passengers at the first sounds of music began to Wake up and smile, and the jig – dancing. People recognize that if not for the work or urgent matters – willing to go further. And thanks for the sudden feast for the soul and good mood for the whole day.

The passengers sang along, taught Christmas carols and filmed their journey to work on phones. Passengers are smiling, and the conductor runs in a party hat with hair. 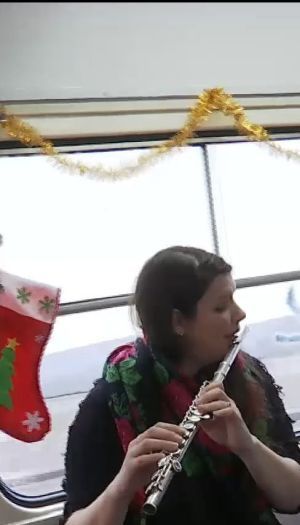 After a certain time the first student collective of musicians was replaced by ethno-band “Princess”. The effect was the same – some even missed their stop, to listen to songs that I liked. “Today is a holiday day. I think it’s to late,” – they explain. Ukrainian Christmas carols sang together, and the singers, and passengers. The next band was “where people and friends,” performers with a flute, a tambourine and a guitar. Musicians applauded and filmed dozens of passengers. “I love it! I think we all need such positive, amazing, spontaneous things,” confessed the people.

The last tram a miracle worked Nan, Emin and Sergei team Vakarchuk from the fifth season of “the Voice”. Song marathon overall lasted more than six hours. The experiment unanimously considered successful, because the miracle can happen even if you just go into the tram and it was proved in Kiev in the last days of 2017.