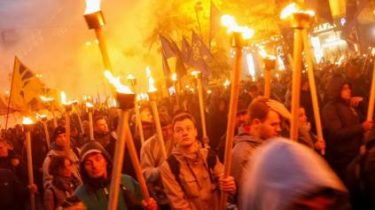 Ukrainian nationalists plan 1 January to hold a mass rally in memory of the OUN leader Stepan Bandera. In ten cities across the country held marches with torches, reports Ukrainian Pravda.

Organize marches local cell of the movement “Right sector” and other right-wing organizations. It is now known that the action will take place on the streets of Kyiv, Lviv, Sumy, Kharkiv, Ternopil, Dnieper, Rivne, Kherson, Kryvyi Rih and Melitopol. Capital the procession will start near the monument to Taras Shevchenko and will end at the Independence square, where the Veche will take place.

As reported, on the day of the Intercession on October 14 in Kiev held a March to the Day of defender of Ukraine and the 75th anniversary of the Ukrainian insurgent army. Several thousand people marched with torches and banners through the city centre.