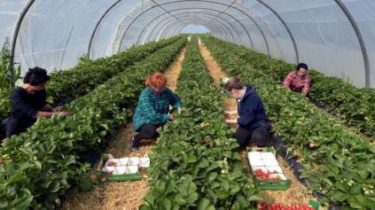 Since the beginning of 2018 in Poland came into force new rules of registration of employment of foreigners. Thus, the application of Polish entrepreneurs about the intention to entrust a job to a foreigner now replaced paid-for permits for seasonal work.

The period of performance of seasonal work cannot exceed nine months in a calendar year, reports “Polish radio”. This period counts from the date when the foreigner entered Poland.

Is the permit for seasonal work is 30 PLN (about 240 UAH at current exchange rate). To give it will work in crop production, horticulture, tourism and gastronomy.

Researchers-sociologists were shocked by the number of Ukrainian migrants

“The purpose of the implementation of the new rules is, first of all, the adaptation of state norms to the legislation of the European Union”, – commented the Director of the Voivodship labor office in Warsaw Tomasz Sieradz.

The official also noted that the application instructions were ineffective from the control of the State labour Inspectorate and border guards. It was not clear for whom the foreigner and under what conditions. Not confirmed nothing except the fact of registration.

Earlier it was reported that Ukrainian workers in Poland – at least 1.2 million. According to the estimates of financial institutions, the Ukrainians are trafficked to the country from 3 to 5 billion euros annually.

Videoblue thousands of Ukrainian workers were behind bars in Russia