In Lviv, the driver of the jeep crashed into a patrol car 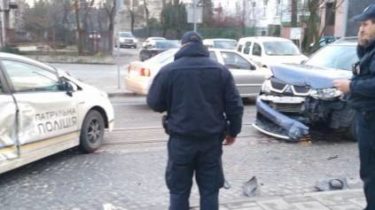 Today, January 4, in Lviv at the intersection of center and Academician Rudnitsky happened accident to participation of a patrol car.

This was announced by activist Igor Zinkevich on his page on the social network.

“Patrol police moved on the center, and a Jeep “Mitsubishi” on the street of Academician Rudnitsky and at the intersection there is a sign that provides the benefit of a traffic patrol police – in this case, the driver of the Jeep is not right,” – wrote the activist.

We will remind, this morning in the capital at the intersection of Forest Avenue and the streets milyutenko bus knocked down a woman.

“The Shuttle bus No. 63 ran over a woman pedestrian. The victim in the minds hospitalized urgently”, – stated in the message of community in Facebook dtp.kiev.ua.