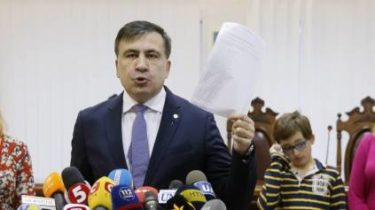 The claim of the leader of the party “movement new forces” of Mikheil Saakashvili to the President of Petro Poroshenko about the illegality of the decree about deprivation of its Ukrainian citizenship will be considered in the appeal administrative court in the new Supreme court.

The meeting is scheduled for 12:00 on January 29, reports “Interfax-Ukraine”.

The guilty Saakashvili in Georgia and Ukraine. The list of criminal cases against the politician

So, at first this claim was considered in the Supreme administrative court where it was filed last fall, and on 3 November it opened the proceedings.

Meeting of the SACU judgement on the case was postponed several times for various procedural reasons.

The last meeting on this matter was assigned to KUAT on 21 December 2017, but it won’t happen because in connection with the judicial reform in Ukraine from 15 December 2017 Vasu has suspended its procedural activities.

Recall that Saakashvili was deprived of citizenship in late July, when he was outside Ukraine. He is a politician went back on September 10. He entered the territory of Ukraine through KP “shehyni”that in Lviv region, although I was going to make it through KP “Krakovets”. The border, he got the bus and crossed it illegally, along with 60 others. Some of them have used force against the guards. The court found the politician guilty of illegally crossing the Ukrainian border and ordered to pay a fine.