Tillerson: the United States wants to improve relations with Russia, but the cornerstone is Ukraine 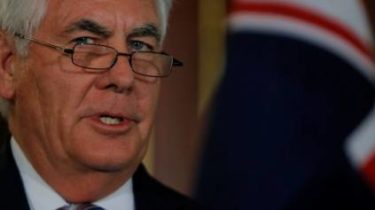 The United States seeks to improve relations with Russia, but I think it is impossible until progress has been made in respect of Ukraine. About it the Secretary of state Rex Tillerson said in an interview with CNN.

“We have to be very open, direct and honest with each other that we both – I think foreign Minister Lavrov as well tuned into it to improve this relationship, as I do, these are complex issues, and we have made clear that the cornerstone is actually Ukraine,” – said Tillerson.

“We must make progress in Ukraine”, – said the Secretary of state.

At the same time, he noted that the investigation of the Russian intervention in U.S. elections does not affect its diplomatic relations with the Russian officials.

As you know, the US special services accuse Russia and Putin personally in the organization of the campaign for intervention in the US presidential election through propaganda and hacker attacks. Vladimir Putin and other representatives of the Russian authorities categorically deny any involvement in attempts to intervene in the American elections.

The FBI Director Christopher ray said that the Bureau intends to create a special unit to combat the threat of foreign interference in U.S. elections, including from Russia.