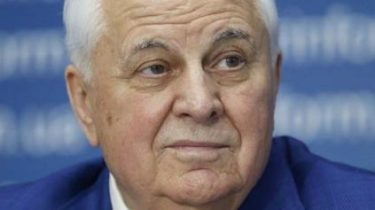 According to the first Ukrainian President Leonid Kravchuk to stop the war in Ukraine, it is necessary to change or fill the other contents of the “Minsk format“.

He told about it in interview “Radio Freedom” and “112 Ukraine”.

Gerashchenko said that will solve the “Minsk” this year

According to Kravchuk, to stop the war, you must first sit down at the negotiating table with Russia alone.

“What is happening in the Donbas is the hand of the Kremlin. And while we do not agree with Russia – we can do what Russia has that we can’t, well, let’s say, about the territorial integrity and sovereignty, we can never say, all right. This is one of the ways,” he said.

“The second – to change or fill the “Minsk format” to other content. I see here or go to “Budapest” or leave “Minsk”, but to fill it with other functions”, – said Kravchuk.

Also, in his opinion, Ukraine should join NATO, because Russia is a neighbouring state.

As previously reported, Ukraine plans to join the extended NATO’s capabilities. “According to the conclusions of the military experts of the partner countries, Ukraine meets all the criteria that must be met by the potential participant” – said the NSDC Secretary Oleksandr Turchynov during the meeting with Stoltenberg in December 2017.

At the same time, President Petro Poroshenko stated that Ukraine’s membership in NATO is a real prospect, but not 2018.