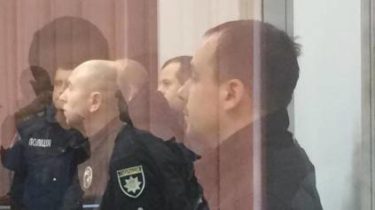 The Shevchenkovsky court of Kiev left under guards of the employee of service center of the Ministry of internal Affairs Sergey Find suspected in the fatal accident, which occurred in the capital in November last year, says the press service of the Prosecutor’s office.

“The Shevchenkovsky regional court of Kiev upheld the petition of the Metropolitan Prosecutor’s office and extended for two months the detention of 35-year-old driver who caused a car accident on the street. Stetsenko,” – said in the message.

Custody Naida will stay until March 11, 2018, inclusive. The investigation is continuing.

The interior Ministry denied the “protection” of officials, from-for which in the accident killed people

AT THE REQUEST OF THE CAPITAL PROSECUTION, THE COURT HAS LEFT UNDER GUARDS OF THE EMPLOYEE OF SERVICE CENTER OF THE MINISTRY OF INTERIOR, WHICH MADE A DEADLY …

Published by the Kyiv Prosecutor’s office on 12 January 2018

We will remind, on November 13 in the evening Mr Nayda on your Mazda flew into the oncoming lane and caused the accident with one dead. He collided with the Mitsubishi, the driver who was hospitalized, and the passenger died on the spot. Witnesses say that the officer was drunk. If fault will prove, to it threatens from 3 till 8 years of imprisonment.

Later the police reported on the results of examination concerning the state of intoxication Nayda. His blood was of 2.69 ppm is almost 14 times higher than the acceptable norm. The man was on the verge of alcohol poisoning.