The court postponed the hearing on the case Kohanivsky 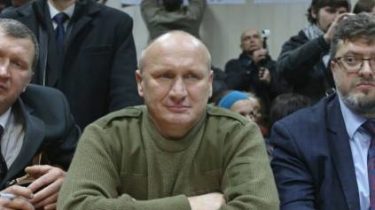 Svyatoshinskiy district court postponed for January 25 hearing on the case of the leader of “Volunteerism OUN” Nikolay Kohanivsky, who was detained for shooting from a traumatic weapon unregistered.

On it informs Radio Liberty.

“Judge Ivan bandura made this decision, since the defendant and his counsel filed a motion to postpone from-for absences in court of the victim Ruslan Cazmali”, – stated in the message.

At the same time the Prosecutor Janina Palamarchuk did not support the petition for transfer. She stated that it is possible to hold the meeting because the absence of the victim does not preclude consideration of the case.

Video settings the capital lit up the building, which was a conflict between Kohanivsky and Camalou

Kohanivsky said he did not admit his guilt and opposed the continuation of the meeting without Cazmali. Kohanivsky the lawyer said that the victim, the law enforcement system and this could have led to a violation during a pretrial investigation.

Earlier, the leader of the “Volunteer movement of the OUN” Nikolay Kohanivsky chose a measure of restraint in the form of a round-the-clock house arrest.

Recall, 23 October Svyatoshinsky court of Kyiv to elect a measure of restraint for the head of the volunteer movement, the OUN Nicholas Kochanowski, who is suspected of shooting from a pneumatic pistol during the fight with the ex-commander of one of platoons of the “Right sector” Ruslan Camalou.

The court could not elect a measure of restraint Kochanowski and moved the meeting on the morning of October 24. After making this decision, the activists blocked the courtroom, not to allow law enforcement officers to take the leader of the volunteer battalion OUN in the detention center.

The police have opened criminal proceedings for the pogrom in the Svyatoshinsky district court. Law enforcement officers continue to document damage to property supporters of Kochanowski.