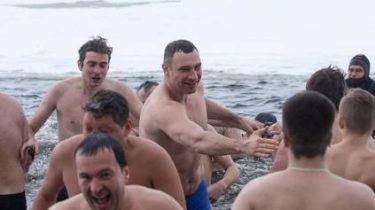 The mayor of Kiev Vitali Klitschko along with his deputies, heads of districts, deputies of the Verkhovna Rada and Kyiv city Council in the morning, 19 January, had already dived into the Baptismal water in the Park “Natalka” in Obolon.

Klitschko assured that it was not a forced action to his subordinates. About it reports a press-service of the mayor.

“It was from my side of the offer. Like that, you know, consolidation and tempering of the team. Today is a big Christian holiday and I want to congratulate all of you on Baptism. It is believed that on this day, the water gets curative properties. Let Jordan water helps us to toughen up and get healthier, charges bright thoughts and real faith – in God, in Ukraine and in our case! “- said Klitschko after diving into the hole.

The mayor joked, referring to his deputies and heads of districts, that next year those who will not work, can not come up immediately.

Note that thousands of people today will dive into the hole, as believers celebrate the Baptism. In the capital, equipped with dozens of places for swimming in icy water near each on duty doctors and rescuers. This is stated in the plot of TSN.Ranok.

Videodesexy people will dive in the hole – Ukraine Baptism day

Ukraine is celebrating Baptism. In the capital, equipped with dozens of places for swimming in icy water, each on duty doctors and rescuers. 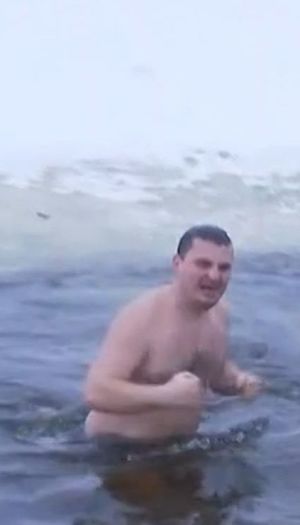 Meanwhile in Russia, President Vladimir Putin crossed himself and also jumped into the hole.