In “Kievavtodor” denied the collapse of the overpass on the Havel 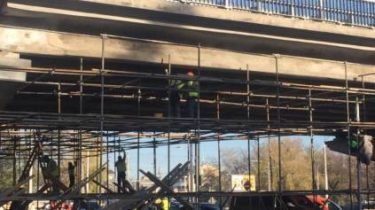 In Kiev, at the intersection of prospect Komarova Boulevard and Vaclav Havel has been structural damage to repair of the overpass, not its collapse.

“As a result of traffic violations, namely a height of the vehicle, an accident involving a transit truck with trailer that resulted in damage to the temporary metal structure that was installed for the repair of the overpass,” – said in the message.

As assured, the road, no damage to the overpass or support structures in the accident no.

“Work on dismantling of metal structure completed,” – added in “Kievavtodor.”

Earlier, eyewitnesses of the incident reported on page dtp.kiev.ua in Facebook, in Kiev collapsed part of the structures of the overpass. The police blocked the road, consequently, formed a considerable congestion.