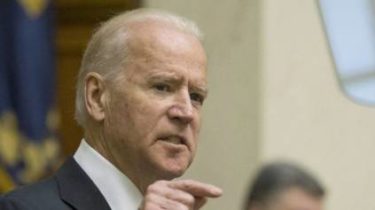 He stated in a commentary, “Voice of America”, he advised the officials of the administration of current US President Donald trump carefully record what they say Ukrainians and check how they keep their promises.

“I’m desperately excited by the setback in the fight against corruption in Kiev. Here’s one concrete example. I was given the job against Ukraine. So I remember I left there to convince our team that we need to give Ukraine a long-term loan guarantees. I went to Kiev 12-13 times, and in the end had to announce that we are offering one billion dollars in loan guarantees. I received promises of Poroshenko and Yatsenyuk that they will take steps in respect of the attorney General (at that time the Prosecutor General’s office was headed by Viktor Shokin – approx.ed.) but they didn’t do it,” recalled Biden.

After that, said former Vice-President of the United States, he said at a press conference that Ukraine will not receive one billion dollars loan.

“They tell me: You do not have such authority, you – not the President, the President said that he would give. I was like, call him. I said that you don’t get a billion dollars. I said I’m leaving in 6 hours, if your attorney General not fired by the time you do not get the money. And that son of a bitch was fired. And in his place put someone to trust”, – he stressed.

In his opinion, the Ukrainian government has done some very important necessary institutional and personnel changes.

“But one of the three necessary institutions now give it back. Anti-corruption court. But they promised that this will not happen,” – said Biden.

We will remind, earlier former Vice-President of the United States praised the decision of the current White house administration to provide Ukraine with defensive weaponsas it will increase the price aggression of the Kremlin.

He stressed that military aid from the US only “will increase the price for Russia in its aggression against Ukraine despite the fact that in Russia there is a “big lie” about the alleged lack of Russians in the occupied Donbas. Biden expressed his belief that in Russia there is a political confrontation of Russian involvement in the armed conflict in Eastern Ukraine.