In Ukraine, a three times increase in the number of second-hand shops 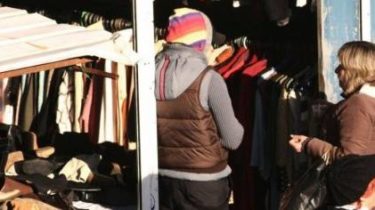 To vilify and to bring – in Germany appeared second-hand, which clothes can not buy, but borrow. In Ukraine is that second – traditional, but it should be said that their number in recent years has grown three times. Now worn things in Ukraine constitute 45% of the total imports of clothing. And these stores are pretty popular among Ukrainians.

Ukrainians ‘ purchasing power in 2014 has decreased three times. A new dress or shirt for most people, it is now an expensive luxury. After all, even affordable brands are afraid of the price tags with three zeros. Therefore, half of Ukrainians refusing new things in favor of worn and second hand stores are growing like mushrooms after rain.

In the second you can buy branded things. The fact that a regular store is thousands, you can buy, say, for 300 UAH.

And yet, is it safe is cheap? Disease and negative energy from the previous owner – the main counter. Secondary clothing is a strong special gas formaldehyde. And he, say the chemists, is very harmful:

“Yes, formaldehyde is dangerous. He and a carcinogen. And generally a toxic substance. But he is good at killing pathogens. Therefore, after such treatment the germs that are there can theoretically be no chance”.

Therefore, in the second often has an odor. After buying a resale clothing should be thoroughly washed.

For many Europeans, thrift is not only saving, but also the opportunity to find something exclusive. Moreover, for a nominal fee to share their outfits with others.

In Germany, for example, the second moved to the Internet. A new kind of sharing outfit called didaticos. There is no need to search a bunch of dresses, and to stand in a queue on the day of delivery. For a small monthly fee the customer can take a month four pieces of clothing. That is, take a – as books in the library. Outfit coming in the mail. Often the clients themselves give up their dresses for the use of others.

Yet many are still embarrassed to admit that dress up in second-hand stores. A fashionable gloss Vogue calls Kiev is the best city for cheap and quality shopping. In second ladies from all over the world hunt for an exclusive. Secondary clothes do not disdain even Hollywood stars such as Julia Roberts and johnny Depp. To find something worthwhile, it is necessary considerably to dig in the mountains of clothes. Julia Roberts, for example, it succeeds so well that her wearing a dress at the ceremony “Oscar” has cast a spell over the world’s media.

Earlier it was reported that Ukrainians are increasingly buying clothes on the online flea markets.