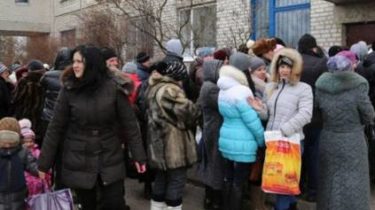 Ukraine will receive 2 million euros from Italy for humanitarian assistance to the population of Ukraine, which suffered as a result of the conflict in the Donbass. This was reported by the press service of the Ministry of foreign Affairs of Italy.

“Stay Minister Angelino Alfano in the Ukraine gave him the opportunity to announce the release of a package of humanitarian aid for the population which suffered as a result of the humanitarian crisis in the East of Ukraine, for total amount of 2 million euros”, – stated in the message.

Humanitarian aid will be divided into three parts. 500 thousand Euro will go to the world food programme (WFP) to deliver food and basic necessities. Another 500 thousand euros will be given to the UNICEF for funding educational programs on mine safety. The biggest amount – 1 million Euro will be transferred in favour of the International Committee of the red cross to meet the needs of health.

According to the report, during a meeting in the Donbas with President of the Special monitoring mission of the OSCE Ertuğrul Apakan, the Prime Minister assured him of the full support of Italy and said that the work of the mission in a high-risk zone is important for the implementation of the Minsk agreements and prevent dangerous escalation of the conflict. After arriving in Mariupol Alfano reiterated that the Ukrainian crisis is a priority of the Italian presidency in the OSCE.

The Italian foreign Ministry also announced that on Thursday, February 1, the head of the OSCE plans to visit Moscow, where he expected to meet with Minister of foreign Affairs of Russia Sergey Lavrov to discuss the situation in the Donbas.

Recall that during his visit to Ukraine the Minister of foreign Affairs and international cooperation of Italy to the OSCE Chairman, Angelino Alfano also met with President of Ukraine Petro Poroshenko. They discussed the situation in the Donbass and touched the issues of further violations of the rights of people in anacoana Russia to the Crimea.